In this paper, we present the results of structural and photoluminescence (PL) studies on porous layers produced on a heavily p-doped (100) GaAs wafer by electrochemical anodic etching. The evolution of porous GaAs structure as a function of layer preparation conditions were investigated by x-ray diffraction (XRD). We show that porous layers have the same crystallographic orientation as the substrate from which they are originated. We also report a relative XRD peak separation indicative of a variation of the lattice parameter of the porous layer. The photoluminescence of porous layers were characterized by a narrow emission band in the visible region attributed to the confinement effect in GaAs nanocrystals having a reduced size distribution. Chemical treatment in Sodium Carbonate solution was shown to enhance both the crystalline quality and the intensity ratio of visible to infrared emission of porous GaAs.

In this paper, we discuss two blueshift mechanisms that are present during the rapid thermal annealing of GaInNAs quantum wells (QWs). A GaInNAs/GaAs sample was grown using molecular beam epitaxy with a GaAs cap layer. Photoluminescence (PL) peak wavelengths from the QWs were measured for annealing temperatures, 680–800 °C, and annealing time up to 3 h. An experimental PL blueshift has been analysed for individual blueshift components due to the reorganization of the N-bonding configuration and the In/Ga interdiffusion across the QW interfaces, using a genetic algorithm based approach. It is found that the interdiffusion-induced blueshift is unaffected by the nitrogen-bonding configuration if the diffusion length is less than 2 nm. However, for larger diffusion lengths, the QW with gallium-rich N-bonding configuration shows a larger blueshift. Our calculations suggest the presence of N–Ga3In1 bonding configuration in the as-grown GaInNAs/GaAs QW, which changes to a mixture of N–Ga3In1 and N–Ga2In2 after annealing. The activation energy for short range order (SRO) is 2.38 eV, which is smaller than that for the interdiffusion process (3.196 eV), indicating that SRO is the dominant mechanism for the PL blueshift at low annealing temperatures and at the beginning of the annealing process. 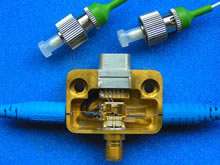 Complex three-dimensional (3D) integrated circuits involving both optical and electronic elements are now easier to make, thanks to a “wafer bonding” technique developed by a European research consortium. With the right commercial backing, the new technology will help Europe stay competitive in communications and sensor technology.Photonics is the science of controlling photons – the particles that make up light. Photonic devices are essential in telephone and computer networks, where they manage the flow of information along optical fibres. Pollution monitors, laser rangefinders, surgical lasers and DVD players are other examples of photonics in action.Photonic devices are made on chips, in a similar way to electronic circuits, by combining elements such as laser diodes, waveguides and detectors. Some of these circuits use purely optical technology, but most are hybrids that include both photonic and electronic components.The problem, as Helmut Heidrich of the Fraunhofer Institute for Telecommunications in Berlin explains, is that the growing complexity of these devices is pushing the limits of current manufacturing technology. In particular, photonic components are based on special semiconductors such as gallium arsenide (GaAs) or indium phosphide (InP), while most electronic components use silicon. Working with two fundamentally different materials on the same chip is difficult and expensive.Instead of using two types of semiconductor in the same process, an alternative might be to fabricate separate slices, each made from one basic material, and then stick the slices together. In June 2004, a team of European scientists set out to show that this “wafer bonding” technique could be an effective way to make complex multi-layer photonic devices.The EU-supported WAPITI project was coordinated by the Fraunhofer Institute for Telecommunications and had four other academic partners: Romania’s National Institute for R&D in Microtechnologies, the Max Planck Institute of Microstructure Physics in Germany, the University of Athens, and the University of Cambridge in the UK. A fifth partner, the E V Group (Austria), contributed its expertise in processing and machinery for full wafer bonding. WAPITI began in June 2004 and finished in September 2007.Microring lasers

To show the potential of wafer bonding, the project partners set out to build optical elements known as active microring resonators. Microrings, which act as power storage devices, are a key part of the lasers which allow high-bandwidth communications signals to be spread across a wide range of laser frequencies. They also have great potential as wavelength converters for telecommunications, and in monitoring applications, such as the detection of biological or chemical substances.Using InP and GaAs wafer substrates, the WAPITI team created various kinds of microrings with radii down to 10 µm. The two-layer technique allowed them to create microrings with vertical connections to the transparent waveguides that carry light in and out of the microrings. Compared to the standard technique of horizontal coupling on a single layer, vertical coupling allows the production of smaller microrings, which in turn means higher data rates. The researchers tested their microring lasers with several channels of wavelength division multiplexing, at data rates up to 7 Gbit/s.Accurate alignment is one of the biggest challenges in wafer bonding. Each wafer is a slice of semiconductor material large enough to hold thousands of chips; only towards the end of the process are the individual chips separated and packaged. With the width of the smallest electronic circuit elements now down to 45 nm or less, accurate alignment across the whole wafer is crucial.Maintaining alignment is hard enough over a single wafer, but even trickier when two wafers are made separately and then bonded. Different wafer materials have different rates of thermal expansion, so temperature changes during processing can distort the alignment of the tiny multilayer circuit elements.Using electron beam lithography, the WAPITI partners achieved good results in aligning wafers of InP and GaAs 50 mm in diameter – currently the standard wafer size for these materials. Future development will bring the need to bond 50 mm InP and GaAs wafers to full-size (300 mm) silicon wafers. For this more difficult task, “step-and-repeat” masking techniques may replace the current system of fabricating each layer as a single unit, Heidrich believes.Practical technology


Although the project did not include an end-user, Heidrich is confident that the technology developed during WAPITI is very marketable. The partners are now looking for a commercial company with an interest in taking their devices to the next level.
He is particularly upbeat about potential applications in environmental monitoring. Because of their small size, the microring lasers developed by the project have output powers of less than 1 mW, so they are not suitable for long-distance communications, which requires powers of 6-30 mW. Their high-quality resonators are, however, extremely sensitive to surface modifications, so they should have many applications as novel detectors for biological or chemical substances, Heidrich believes.
Source: ICT Results
If you need more information about Germanium wafers,please visit our website:http://www.powerwaywafer.com,and send us email at angle.ye@powerwaywafer.com or powerwaymaterial@gmail.com.
发帖者 powerway wafer_Powerway Wafer Co., Limited 时间： 6:53 PM No comments: