Each production cluster consists of two multi-wafer AIX 2800G4-TM process modules with susceptor configurations of 15x4-inch and one automation module serving both process modules, to enable high-volume manufacturing. Customers benefit from maximized throughput as well as the industry’s highest product yield and chemicals efficiency of the AIX 2800G4-TM, therewith setting the sector’s benchmark for the lowest cost per wafer.
“As a consequence of the increasing acceptance in numerous lighting and display applications such as smart lighting, city lighting and fine pitch display technology, market demand for ROY LEDs is getting stronger and therefore, requires continuous capacity expansion by manufacturers. As we have been very pleased with AIXTRON’s reliable AIX 2800G4-TM platform and excellent service over the years, we decided to add further systems to the tools already in production”, says Mr. Niu Xingsheng, Vice General Manager of Xiamen Changelight.
Dr. Bernd Schulte, AIXTRON’s President, comments: “AIXTRON’s AIX 2800G4-TM platform has built itself a reputation as the tool of record for the production of GaAs-based ROY LEDs, VCSEL and thin-film solar cells in the industry and therefore, we are convinced that we will provide Changelight with the best possible support in their expansion plans. We are looking forward to continue our longstanding, trustful collaboration with Changelight.”
Keywords:MOCVD,AIXTRON,ROY LED,Xiamen,Changelight
Source:LEDinside
If you need more information about GaAs wafers,please visit our website:http://www.powerwaywafer.com,and
send us email at angle.ye@powerwaywafer.com or powerwaymaterial@gmail.com.
发帖者 powerway wafer_Powerway Wafer Co., Limited 时间： 11:46 PM No comments: 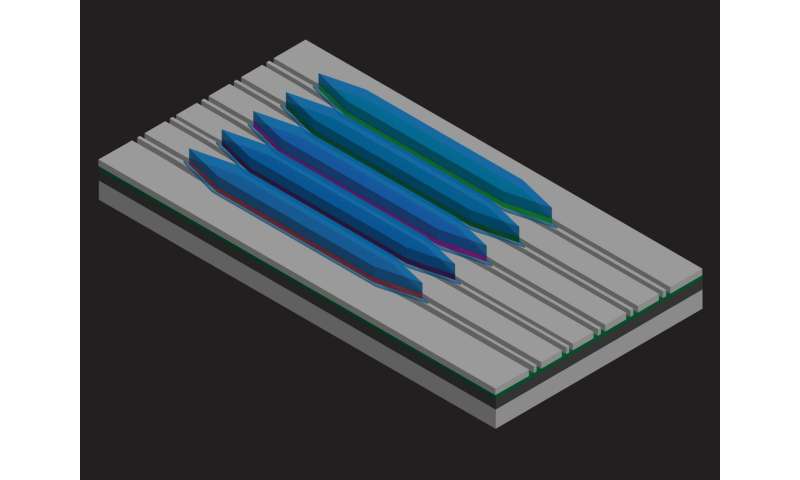 A team of researchers from across the country, led by Alexander Spott, University of California, Santa Barbara, USA, have built the first quantum cascade laser on silicon. The advance may have applications that span from chemical bond spectroscopy and gas sensing, to astronomy and free-space communications.

Integrating lasers directly on silicon chips is challenging, but it is much more efficient and compact than coupling external laser light to the chips. The indirect bandgap of silicon makes it difficult to build a laser out of silicon, but diode lasers can be built with III-V materials such as InP or GaAs. By directly bonding an III-V layer on top of the silicon wafer and then using the III-V layers to generate gain for the laser, this same group has integrated a multiple quantum well laser on silicon that operates at 2 µm. Limitations in diode lasers prevent going to longer wavelengths where there are many more applications, so the group turned their attention to using quantum cascade lasers instead.
Building a quantum cascade laser on silicon was a challenging task made more difficult by the fact that silicon dioxide becomes heavily absorptive at longer wavelengths in the mid-infrared.
"This meant that not only did we have to build a different type of laser on silicon, we had to build a different silicon waveguide too," Spott explained. "We built a type of waveguide called a SONOI waveguide [silicon-on-nitride-on-insulator], which uses a layer of silicon nitride [SiN] underneath the silicon waveguide, rather than just SiO2."
The breakthrough could lead to several applications, Spott explained. Traditionally, silicon photonic devices operate at near-infrared wavelengths, with applications in data transmission and telecommunications. However, there is emerging research interest in building these silicon photonic devices for longer mid-infrared wavelengths, for a range of sensing and detection applications, such as chemical bond spectroscopy, gas sensing, astronomy, oceanographic sensing, thermal imaging, explosive detection, and free-space communications.
The next step for the team is to improve the heat dissipation to improve the performance of these QCLs and to allow them to make continuous-wave QCLs on silicon. "We generally hope to improve the design to get higher powers and efficiency," Spott said. "This brings us closer to building fully integrated mid-infrared devices on a silicon chip, such as spectrometers or gas sensors. Silicon is inexpensive, the fabrication can be scaled up to significantly reduce the cost of individual chips, and many small devices can be built on the same silicon chip for example multiple different types of sensors operating at different mid-infrared wavelengths."
Source:PHYS

Integration of GaAs, GaN, and Si-CMOS on a common 200 mm Si substrate through multilayer transfer process